Well, the homestead has had quite the week. My goats and chickens have surely seen better days. If there was ever a reason for them to complain, this would have been the week for them to do so.

Let’s begin with the tornadoes.

The goats and chickens rode out both tornadic storms together in the goat barn. I thought the chickens would have taken shelter in their coop. I guess they felt safer being with the goats.

Here they are after the first tornado. No damage…just a little flooding. 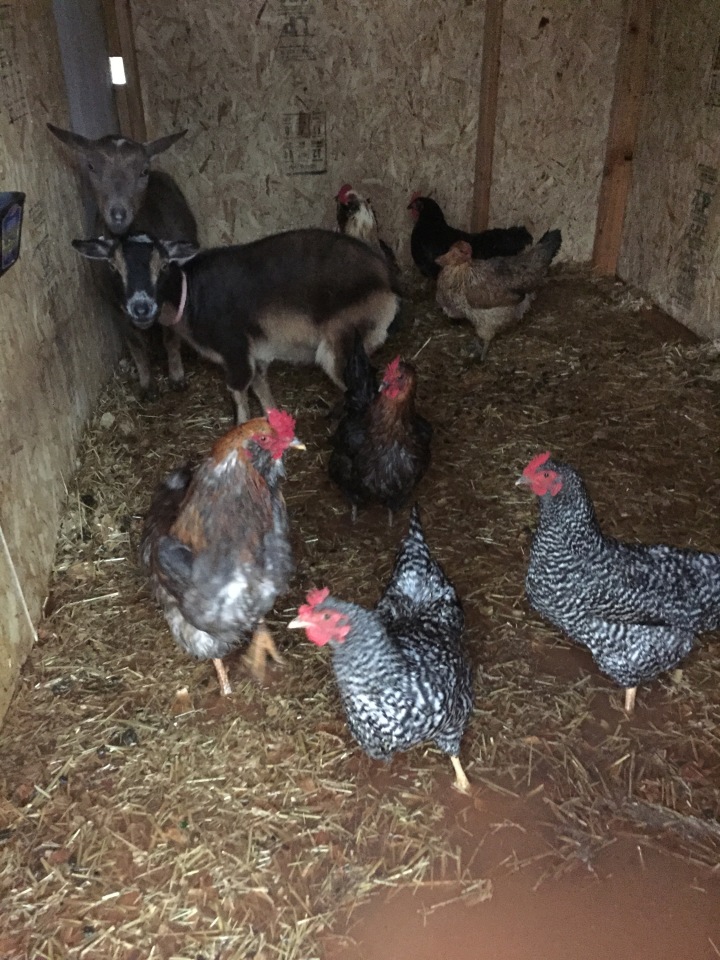 Poor things. When the second tornado hit…the whole goat barn was turned, slammed into a fence and part of the back was taken off. I was thankful to find them all safe and sound. I have to admit, while in the shelter I had mental images of them being swept up and away. I’m sure they were terrified through it all.

There was the day I had to transport my goats in the back of a truck to their new temporary home. Although they did not complain during the transport, I could tell by their countenance, they were not impressed by the situation.

There was the day my goats escaped from their temporary new home. Which in turn, led to spending Mother’s Day searching for them through all manner of brush and briar. Which in turn, led to my husband coming into contact with quite a bit of poison ivy and developing an unfortunate rash from said contact. Which, was all for not. We went home knowing our goats were still lost. Sad day.

Then there was the day that poor Fran, my little Polish hen, disappeared. Bless her. Poor crazy little Fran. She wandered away one afternoon and has yet to return.

Hopefully, this next week will prove to fare much better for all my animals. Hopefully, no one else will wander off. Well, my roosters, they can wander off as far as they want. Seriously, it might bode better for them, as their immediate future involves a skillet and a side of mashed potatoes.

Oh, and to end this post on a more positive note…

There was also the day we received word from the sweet friend who was letting our goats stay at her house. She and her husband  searched for our goats and…found them (yay!).

A picture to confirm.

This site uses Akismet to reduce spam. Learn how your comment data is processed.